It’s a sad time for Gateway, as funding from Birmingham Public Health comes to an end for one of our longest-running services.

The popular Health Trainers service, offering one-to-one support and advice to people who want to make lifestyle changes, has been decommissioned and will finish at the end of September.

All our Health Trainers are now working hard to finalise arrangements with their remaining clients and get everyone to a place where they feel they have achieved at least some of their goals.

Although it’s a sad time for us, it’s also bittersweet, as we reflect upon the Health Trainers’ many successes and achievements. So we thought this would be a good opportunity to have a look back at the service and share some of the stories and statistics with you.

The Health Trainers service was started in 2008. By the time the funding ends, we will have worked with more than 18,000 South Birmingham residents, with more than 90% completing their support. 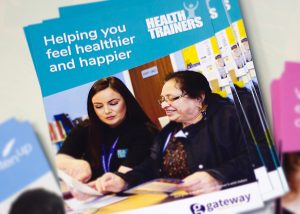 Over the last two years, the service has changed very slightly. Rather than focusing our support in the most deprived areas of Birmingham, we now focus on people with a level of vulnerability. This can include recent offenders, people with substance misuse, people who have experienced domestic abuse, or mental ill health, and people who are in temporary accommodation. More than a third of the 2000 people we work with every year are in this group.

When a Health Trainer starts working with someone new, they help them to come up with a set of achievable goals to work towards. These often include losing weight and becoming more physically active, but they also include stopping smoking, or even becoming more confident and socially active.

Over the last decade, Gateway’s Health Trainers helped people to achieve, or part-achieve, the goals they set themselves in 84% of cases. For example:

Dr. Asfia Aftab is a GP Partner at Vicarage Road Surgery, one of the GP surgeries that Gateway Health Trainers worked with. When told about the end of the service, she said, “I am sad to hear this news. As you know, we had a great experience with Health Trainer services for our patients in Kings Heath and say they were a very valuable part of the primary care services we provided. We had a lot of great anecdotal feedback from patients.”

As Josh explains, below, Health Trainers is a “whole person” service and one of the biggest benefits of the service has been the ability to offer people time. Time to build up a rapport, learn as much as possible about a person, and really talk things through.

Josh came to Gateway after completing a degree in Psychology; first as a volunteer, and then as a Health Trainer. He has used the skills and knowledge gained as part of his degree to back up his work with Gateway, helping people to make significant lifestyle and behavioural changes.