We were horrified to read recent research showing that one in ten girls aged 14-21 have been unable to afford sanitary products. So when we heard about the Birmingham Live “#BrumFeeds” campaign, we knew straight away how we wanted to help.

#BrumFeeds aimed to collect 100 tonnes of food for Trussell Trust foodbanks, by holding the biggest single food donation the city has ever seen. Last Friday, people were encouraged to donate at three city centre locations for “The Big Drop”. 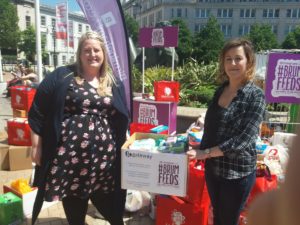 At Gateway, we decided that our contribution should focus on sanitary products. After all, we know that people don’t usually give as many toiletries as they do tins of beans! So office staff held a donation drive in our office, and on Friday we donated hundreds of tampons and sanitary towels to the #BrumFeeds collection point in Victoria Square. You can watch Caroline and Debbie dropping them off in the video below.

We always knew Brummies were a generous lot, but we were pleased to see how many people donated to the campaign. Birmingham Live reported that over a tonne of donations were made in just a few hours! We hope that our donation helped a little bit, and perhaps even raised people’s awareness of the problem of period poverty.

What is Period Poverty?

Put simply, period poverty is the problem of being unable to afford sanitary products.

A January 2018 report from Plan International UK says, “Period poverty has previously been seen as an external issue affecting lower income countries. However, in the context of austerity and the rise of homelessness and foodbank use, combined with a lack of supportive and accessible menstrual health management education, it is also being experienced here in the UK.”

Plan International UK’s survey on menstruation found that one in 10 (10%) of girls have been unable to afford sanitary products. It also found that:

At Gateway, many of the people we work with are living with disadvantage. We know from our experiences with the Pregnancy Outreach Workers Service, and our current social prescribing service Healthy Futures, that women who are facing financial constraints will often go without themselves, so that their families can have food.

We fully support the efforts of charities like The Red Box Project, The Homeless Period and Bloody Good Period to try and dispel some of the myths and embarrassment surrounding periods, and to make tampons, towels and other related toiletries more accessible to everyone who needs them.

Why donate sanitary items to foodbanks?

We often refer people to Trussell Trust foodbanks, and we have our own small bank of food and toiletries for emergencies, but we know from experience that sanitary products are just not something people normally give when they donate to foodbanks.

Indeed, Trussell Trust includes sanitary products in its list of non-food donation items, saying “It’s natural that the first thing anyone thinks to donate to a foodbank is food, but toiletries and hygiene products are also extremely important. Alongside the standard food parcel, foodbanks try to provide […] essential non-food items to adults and children in crisis, helping them maintain dignity and feel human again.”