Cuts and some changes for the POW service

It’s been three months since the consultation on Birmingham City Council’s budget proposals for 2015-16 closed and we have been working closely with the Council to decide on the future of the Pregnancy Outreach Workers Service (POWS). 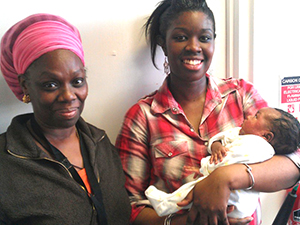 POW Jacqui (left) with a new mum and baby

The good news is that the service has not been decommissioned and POWS are here for another year!

However, the service is going to be subject to cuts of around a third.

Obviously this isn’t great news, but it’s better than it could have been. We’re really pleased to be able to report that Birmingham hasn’t lost this unique service and, although it’s not an outcome we wanted, it’s an outcome we can manage and hopefully build upon.

So how will we manage the cuts?

Well, firstly, we are actively looking for other sources of income. We now have a hole in our budget that we are aiming to fill with other funding.

But if we can’t fill this gap via other means, then we will have to absorb a large cut. Two thirds of the amount of money means we will only be able to work with two thirds of the people we worked with before.

Focusing on the most vulnerable

As part of our discussions with the Council we have talked a lot about the aims of the service, and we agree this would this would seem like the ideal opportunity to focus our work a bit more. We are in total agreement with our commissioners that we need to concentrate our efforts on those clients who need us the most.

We categorise the people we work with based on the risks they disclose when they are referred, so we are already able to identify the most complex cases (we currently call these “Category 4”). This category includes pregnant women who are living in unsuitable or temporary accommodation, who are victims of domestic abuse, who are dependent on drugs or alcohol, or who have recently arrived in the UK with no support. These are the people who need us the most, and the people we most want to work with.

So these clients – the most vulnerable families, who already make up 70% of the people POWS work with – will become our sole focus.

People who don’t fall into this “most vulnerable” category will still get some support, however. Our POWS tap into a wide network, and are particularly skilled at signposting, so although they won’t be able to take them on as clients, they will be able to advise them of other agencies and organisations who can offer specialised support.

We understand that the Council wants us to work with those who need it the most, and to target services to where the need is greatest, and that’s what we want too. To do this even more effectively, though, we’d like to broaden the service intake to become city-wide.

Currently, POWS work only within certain areas of Birmingham. If someone doesn’t live in an area we cover, they are unable to access our support. But we believe that agencies should be able to refer clients based on their needs rather than their postcode.

This would allow us to reach more vulnerable people, and for other agencies to be able to refer to us without first having to pore over maps and boundaries (or, as we suspect might currently be the case, to choose not to refer). We’d like to work with troubled families and ex-offenders, for example, but the probation service doesn’t currently refer people into our service. If POWS was a default, citywide option then perhaps they would.

We’re very pleased to hear that BCC want to work with people depending on their needs, rather than which services are available. This is how we have always tried to work and we believe it is better for everyone.

Thanks to everyone who has supported us over the last nine years, particularly those who wrote to support us during the consultation process. We’re looking forward to the future.