Gateway’s Health Trainers service, offering one-to-one support and advice to people who want to make lifestyle changes, will be closing at the end of September. 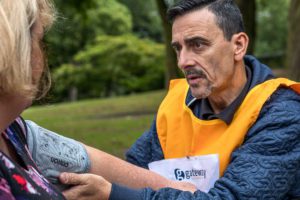 Last week, we looked at some of the numbers and showed how successful the service has been during almost a decade of operation. Gateway Health Trainers supported more than 18,000 people over the years, with more than 90% of people completing their support, and 84% of those achieving or part-achieving their goals.

This week, we thought we’d share some more personal stories, both from the Health Trainers themselves and the people they’ve supported.

Beckie is moving over to work for Gateway’s Pre-Diabetes team, but here she reflects on her year as a Health Trainer and tells us about one of her most memorable clients during that time.

Ralph came to the Health Trainers from the Lighten Up service. Here, he tells us what he has found most satisfying about being a Health Trainer. Sometimes, the successes aren’t as obvious as you think!

Contrary to popular belief, the Health Trainers service wasn’t just about weight loss or physical activity (although of course they helped people with that too!) Many people reported improved mental health and wellbeing, reduced their alcohol intake, or became less socially isolated thanks to their Health Trainer.

Wayne (pictured above at our Health and Wellbeing Day in July) told us how one of his clients came in for help with her weight management, but went on to make many other changes.

“Once she’d made the decision to lose some weight, it felt easier for her to make other changes in her life too,” he says. “One of those things was smoking. She knew she had wanted to stop smoking for a while – especially after one of her grandchildren made a comment about it, saying ‘nanny, you don’t smell very nice’, so the next time she came to see me, she asked about smoking cessation services and I was able to refer her straight away to a stop smoking clinic. A lot of people think it’s really difficult to stop smoking without putting on weight, but because she’d made the decision to change, and made the changes in tandem, she found it a lot easier than she thought.”

Health Trainers pictured in 2016. Margaret is on the far left.

Health Trainer Margaret (left) told us about one of her clients, who was referred for weight loss, but whose issues went a bit deeper than that. “She rarely left the house,” says Margaret, “so she wasn’t doing any physical activity at all. She also had a diagnosed Obsessive Compulsive Disorder which meant that she had a lot of discomfort around eating. She hated certain foods because of her phobia of crumbs and dirt, and didn’t eat any fruit or vegetables.

“So I supported her by taking things really steady and helping her to mentally prepare for the changes to meals. First we substituted just one item of food at a time in each meal for a piece of fruit or veg. Then we started getting her out of the house, for just two or three minutes a day. And she really worked hard. Every time I met her she was going out for longer and longer periods of time and eating more and more healthy foods.

“By the end of the support, she had already lost a stone and a half, and was walking down the road to meet me in different locations. I’m so proud of her! And it’s so rewarding for me, too. I have really loved this job.”

As you can see, the service means a lot to staff and their clients. We hope that, in a future without Health Trainers, people will continue to get the support they need.