Mental health care: helping prevent a crisis for those in crisis

Although we are commissioned to support people who want to improve their physical health, it’s inevitable that staff across all of our services will also support people with mental health issues. As the Mental Health Foundation explains on their website, the two are inextricably linked:

However, as we are seeing more and more, services across the city are being squeezed as never before – and that includes mental health services, which have waiting lists of weeks, or even months, just to see patients.

This situation isn’t OK. It’s distressing that people can’t get the help they need when they need it and in some cases – as you’ll see below – there are real dangers. However the reality is that resources are thin on the ground so, as responsiveness is so essential, we have been thinking about ways in which Gateway can help. As an organisation we are looking at things like the provision of mental health awareness courses and qualifications through our EAST department, and the development of our Volunteer Befrienders service.

And, as Health Trainer Manager, I know it’s more important than ever for staff on the front line not just to be aware of the links between mental and physical health, but to be able to spot potential issues, and advise and signpost clients who need extra mental health support. 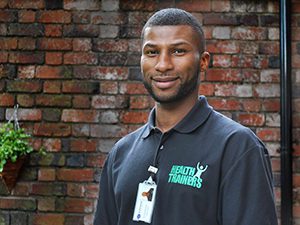 Alan (not his real name) was referred to Gateway’s Health Trainer service last summer by his doctor, and began working with Richard (pictured, right). Alan’s main reason for referral was because he needs an operation and his doctor had advised him to lose some weight before it could go ahead.

Unfortunately, the worry of needing to lose weight, together with some other issues, culminated in him having a mental health crisis, which he’s given us permission to write about here.

Alan said, “I recognised the feelings I was getting because I’ve experienced them before. When I get like this, the worries go round and round in my head and I can’t stop them. It builds up and becomes really stressful. That’s what it was like on that night – I couldn’t sleep for the stress. I had tablets in the house, so I threw them out of the window because I was worried about what I might do.

“I didn’t know who to contact or how to deal with it, so in the end I went onto the computer. I’ve been teaching myself how to use email and I decided to email all the people I’d got in my address book. I wrote that I needed help, and that I didn’t know what else to do.”

The seven people he emailed that night were all people he’d had contact with through various health organisations and community services.

One of them was me.

I received Alan’s email first thing on Monday morning. It worried me, so I asked Richard to get in touch with him as soon as he could.

Richard says, “I called Alan straight away and left a message. I guessed he was at home so I left a number of answerphone messages, hoping he’d hear them, then decided just to go to his house.”

Alan says, “I couldn’t bring myself to answer the phone but I was listening. Richard let me know on the messages that I wasn’t alone. He said he was going to come over and help me, so when the door went, a bit later on, I let him in.”

Richard cancelled the rest of his appointments that day and sat with Alan to talk through what was happening. It was clear that Alan needed emergency help so he called local mental health resource centres. One had a very long waiting list and wasn’t able to see him, but another said they should be able to see him that day, if they didn’t mind waiting.

Alan says, “Richard called a taxi and came with me to the centre, but when we got there we had to wait a long time. After three hours I had an emergency appointment with a Duty Psychiatrist, but I think I was lucky to see anyone at all as they were so busy. I was given a home treatment team – a Care Manager and a designated CPN – and I now have regular appointments, although they’re not as frequent as I would like. They also suggested I put together an emergency plan in case I need it in the future. So now I’ve got a list of contact numbers on the fridge, and an emergency £10 ready in case I need to get a taxi to the centre again. Having these to hand means I won’t worry so much.”

Alan is still using the Health Trainer service, so Richard has stayed in touch, and as part of his Health Trainer support they have regular contact via phone and at appointments. Alan has also got access to a befriender through our Volunteer Befrienders Service.

Since our last appointment I have managed to stay positive, your early call on Monday really helped. I went along to the centre and joined the computer course like you suggested. This has helped tremendously. Thank you for patience and concerns. I have done a lot of walking this week, too. Feeling back to normal now.

Finally, we thought you’d like to see this video that one of our Health Trainers, Chris, made of his client Karen. We think this is a great example of how improving your physical health can lead to improvements in mental health too.