“My health trainer taught me to cook” – Daniel’s story 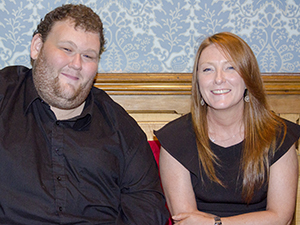 Daniel with his Health Trainer Glenn

When Daniel was first referred into the Gateway Health Trainers service, he was 21 years old and morbidly obese.

The results were quite shocking.

Glenn says, “When I first met Daniel, his diet consisted of Greggs pasties and takeaways. His local chip shop owner would sell him all the food that was left over for £3.00 every night which often consisted of pies, fish, chips and kebab meat.” 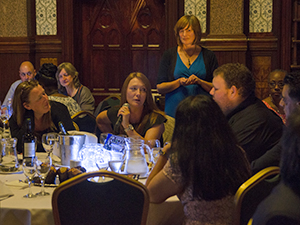 Daniel and Glenn spoke at this year’s Gala

After working with Daniel for a couple of months Glenn referred him to the Lighten Up team and he was given vouchers for 12 free weeks at a Weight Watchers group. Daniel attended all the 12 sessions and lost a considerable amount of weight. He was also more active riding his bike everywhere.

However, once his support had ended, he started to put weight back on.

Daniel re-entered the service another couple of times and, as before, did well with the support of his Health Trainer but found it difficult to maintain what he’d learnt once his sessions were up.

Daniel came into the service for the fourth time in January this year. This time, though, following some training for our Health Trainers, Glenn has been able to employ some new tactics. As a trained Cooking Mentor, she’s been teaching Daniel to cook some of his favourite meals from scratch and he’s already starting to eat at home more.

In August, Daniel made a statement on our Impact Assessment App:

You have made me feel more positive and I am enjoying keeping the diaries. You have been round today and helped me cook a curry from scratch. I’m really looking forward to our next cooking session.

Sometimes, it can take many different approaches over many years to help someone really get to grips with a major lifestyle change. Teaching Daniel new skills like this should build his resilience and give him more confidence in himself, which in turn should help him to stick to his new habits.