2017 and Before · General News · Other Services

Opening up about domestic violence

We know that around 10% of the women our Pregnancy Outreach Workers Service works with are, or have recently been, experiencing domestic violence (DV).

For many women, becoming pregnant means that they are experiencing support from a range of professionals for the first time in their lives. So for many, it’s the first time they have the opportunity to talk about the things that are going on at home.

But having a lot of questions asked about their body and their home life can be quite daunting, so – unsurprisingly – many women find it difficult to open up. It takes time to build up the sort of relationship that allows these sorts of conversations to happen.

Often, women won’t disclose domestic violence to their midwife or health visitor but, given the longer period of support offered by a Pregnancy Outreach Worker, will eventually disclose to their POW.

One such client, Hasna*, was referred to us by her midwife. Catherine, the POW who was assigned to her case, says, “Hasna hadn’t mentioned her current situation to anyone, but her referral said she’d experienced ‘previous domestic violence’, so I knew it was something we might have to talk about at some stage.” 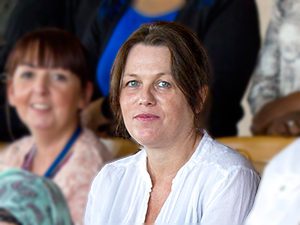 Like most women we work with, it took a while for Hasna to talk about the relationship she has with her husband in any detail.

“When I first meet a new client, even if I know DV might be an issue, I don’t go into it unless she wants to talk about it herself,” says Catherine. “When I first met Hasna, she would talk a lot, and talk fast, but never about DV. It took a few visits, and a few instances of me talking around the subject, for her to calm down and start opening up”.

The POWs are very careful not to push women to talk about abuse until they’re ready. Obviously if there is evidence of violence, or if we feel mum and/or baby are at risk, we are obliged to act and refer to police or social services, but otherwise, we must ultimately respect the woman’s choice.

Another POW, Lynette, remembers a client who hadn’t disclosed domestic violence to anyone, but she felt there were signs in the way she talked and behaved: “I was waiting,” Lynette says. “I knew something would come out. I gave her lots of opportunities to talk if she wanted to, but didn’t push it. Eventually – after the birth, she opened up and we were able to have that conversation and take some steps”.

Catherine agrees. “It’s vital you don’t break your client’s trust. Everything goes in cycles and you know the time will come at some point. You just need to wait until she has the confidence to talk.”

So once a client feels able to talk about domestic violence, how does the POW support her?

“It’s easy for people to think ‘she should just leave him’, but that’s not the right approach,” says Catherine. “The idea of leaving is just huge; not just emotionally, but because there are so many other things to consider. If a woman is being controlled by her husband, for example, she might not have the money or the other practical things in place. The idea of going out into the world alone is frightening”.

Catherine says things are changing at home for Hasna, but Hasna knows she has to be ready with a ‘plan B’. “Now her husband knows that she speaks to other people, and that other people might be aware of what goes on at home, he’s more wary,” Catherine says. “And she feels able to challenge him more, which is good. But, together with a DV worker, we’ve been putting everything in place so that she can leave quickly at any time, should she decide she wants to.”

As well as making sure Hasna has access to money and passports, part of this work means signposting Hasna to other organisations. As well as her DV worker, Hasna is in regular contact with the Freedom Project and her local children’s centre. She knows that she can go to the police at any time and she’s building up a good support network in her local community.

In this video Hasna talks about her relationship with Catherine, what she’s learned and how she feels more able to talk to other professionals because of her.

*some names have been changed