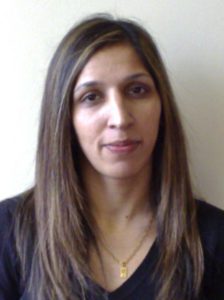 Shazia has been a POW since the start of the service in 2007. At the time, she wasn’t sure what she wanted to do – she’d done some teacher training but knew it wasn’t for her. However, as part of teacher training she’d met someone involved in the health sector, and felt immediately that she would be more suited to this sort of work.

Soon afterwards, she saw an advert for the new Pregnancy Outreach Workers Service and liked the idea of it. “I liked the fact that there would be no routine and I would be doing something different every day, and that I’d be in charge of my own caseloads. I always knew I wanted to help people and that’s exactly what I would be doing.”

Shazia puts her ability to engage with people down to her sense of humour. “I’ll make fun of myself if I have to. Helping clients to see the humour in situations breaks down barriers and brings people closer together.”

Shazia’s most memorable clients are those who have had issues with substance misuse. “When I started, my knowledge of drugs wasn’t great – I knew a bit about it but not much – but over the years I’ve learned a lot from my clients. Now, I understand the phrases people use, and the way users think.”

She continued, “the thing about addiction is: there’s no point in patronising someone or telling them they shouldn’t do what they’re doing. They know this already. They feel a terrible amount of guilt. They deserve to be treated nicely.”

She went on, “the pull of addiction is really, really strong. If the only people you know are dealers or addicts themselves, and they all have your number and know where you live, that’s a hard environment to get away from. Most of the addicts I’ve met started using in response to abuse or trauma from a young age – things they’ve never had any real support for – so the problems go very deep.”

Shaz recently bumped into someone she supported six years ago. As they chatted, the woman thanked her, saying, “you were the one who treated me like I mattered, and didn’t look down on me”.

Shazia says, “This person’s journey was special to me because I was the one who communicated with her the most, explaining what was happening and often being the person who had to give her bad news. She had a social worker, who was very good, but she didn’t trust her… So it was me who was her birthing partner, staying three nights in the hospital with her. And then it was me who explained to her that, because she hadn’t had four clean drug tests, it was unlikely her baby would be going home with her.”

When support ends, Shazia says it’s important to close cases properly by ending contact and making sure that clients are self-reliant. “It’s not fair on them if they continue to rely on me afterwards,” she says.

(Shazia went on maternity leave last month. When she returns next year, it will be to a new role within Birmingham’s new Early Years Health and Wellbeing service.)