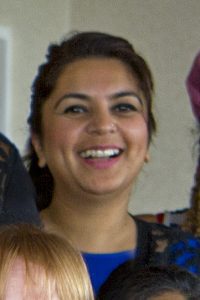 Sophia has been here since the start of the service in 2006. She says, “it’s completely changed in that time!

“Over the last decade – and the last couple of years especially – it’s gone from simple signposting and accompanying women to appointments, to supporting women with issues around safeguarding and substance misuse, and helping them through court reports and procedures.”

Sophia says she’s learned a lot as a POW, both on the job and from her colleagues. “We’re a good team,” she says. “It’s important for us to be able to offload onto each other, bounce ideas around, and support each other through difficult cases.”

Sophia explains how important it is for POWs to meet women as early as possible during their pregnancy. “POWS is a preventative service. Often, if we meet women in the first few weeks of pregnancy, we can start helping them to begin the routines and habits that will lead to a healthy pregnancy. We can sort out a lot of issues before they get to the point where the woman or her unborn child go into safeguarding.”

Sophia is keen to point out that POWS are there for mum, when everyone else is there to support the child, and that they can prevent safeguarding issues. “The whole reason POWS were brought in was to empower women. If we can support them to make their own healthy choices from the beginning, then we can prevent a lot of issues later on down the line. In many cases we can help to stop babies being removed and going into care.”

Many of Sophia’s clients are women with a number of complex issues. “One woman who always stays in my mind already had a teenage child, and she’d had another baby years ago who’d died. When I met her she was pregnant with her third child, but she was not in a good way at all – she was drinking heavily, smoking cannabis and more. She’d been referred to drug workers and social services, but she needed more help during her pregnancy so she came to us.

“I helped her to focus, really. By taking her out of her environment a bit, and helping her to make sure that her money went onto the things she would need for her baby rather than drugs, I supported her to start new, healthier routines.

“For many women, the only support network they have is an unhealthy one, so we can provide a different outlet – we’re there for her to talk to at the end of the phone, we can meet up with her at home or in the community, and we can support her with all the admin that having a baby brings – filling in forms, shopping for essentials and getting to appointments on time.”