Social isolation is a big issue for people of all ages, but research shows that it’s a particular problem for those who live in cities, older people and people with a long term health condition. That’s why having more opportunities to get together with others for a cuppa and a chat is really important. 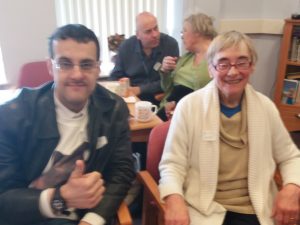 A great example of a group supporting those at risk of social isolation is the Patient Health Forum. It’s for anyone in South Birmingham who has a long term health condition, and its members include people with everything from asthma to arthritis, Alzheimers and anxiety.

Although it can be useful for people to talk about their health condition during the meetings (and, in fact, the meetings are funded by South Birmingham CCG in return for feedback about the health services they use), the biggest benefit that the Patient Health Forum brings is the opportunity to meet and talk to others.

Our first session of the year took place a couple of weeks ago in Stirchley, and 31 attendees enjoyed a buffet lunch, a talk from Wayne on the Five Ways to Wellbeing, and entertainment from a Michael Bublé tribute act. Some, like Irene, even had a sing and a dance!

Committee member Pauline Hartley said, “It matters not what health condition people have – but how they can be helped to deal with the isolation, the social problems and the access to services that will help them. Our members constantly ask if the group will stay open because it so important to them and even sometimes is the only place they go to for social interaction.”

Although the Forum had already been running for a number of years, Gateway became involved in 2014 to help facilitate the meetings. Since then, we’ve been supporting the committee with the general running and budgeting of the group, organising the venue, transport and refreshments, bringing in speakers and entertainment, and sharing our knowledge and contacts. And although funding for the group has dipped recently – meaning we’ve had to go from monthly to quarterly sessions – we’ve seen numbers continue to grow. We’re particularly pleased that older people and carers are coming along because, according to research evidence: