The job of Social Prescribing Link Workers is to listen to what people want and need, and then to direct them to local groups and services that can help them achieve their goals.

Sometimes, those services are also delivered by Gateway!

Glenn is a Social Prescribing Link Worker who works in the North Solihull area. So when she met a patient who needed some help with her physical activity and eating habits, who better to direct her to than the Solihull Lifestyle Service?

Pam* was referred to the Social Prescribing Link Workers service in January 2021, because her GP felt that she would benefit from someone listening and giving her support.

Link Worker Glenn contacted Pam straight away and they arranged a time to talk over the phone.

The following week, Glenn called Pam and they spoke for quite some time. Pam explained she has a long term health condition, and also suffers from arthritis which causes her a lot of pain. Her follow up appointments at the hospital had been pushed back due to Covid, which was causing her to feel very low. Although Pam lives with her husband, he works during the day and she told Glenn she gets very anxious on her own.

As they chatted, it was clear the pain Pam was enduring really got her down, and this had caused her to stop doing the things she enjoyed. She said her eating habits were poor as she didn’t have an appetite and, although her husband often tried to encourage her to go out for a little walk or sit in the garden, she hadn’t been out of the house for a year.

Glenn told Pam about the Solihull Lifestyle Service, explaining that they could offer her support and advice about diet and exercise, and she agreed to be referred to them. She was allocated a Wellbeing Advisor called April, who would be able to start working with her in a couple of weeks’ time. In the meantime, Glenn and Pam talked about exercises Pam might be able to do. She mentioned that she had a treadmill at home but didn’t use it.

Glenn shared her own experiences of arthritis. She explained how she had forced herself to try and walk each day, and had found this boosted her mental health. Pam said she felt better having someone to talk to and said she would start using her treadmill. 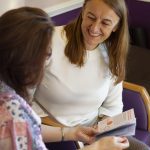 April, a Wellbeing Advisor with the Solihull Lifestyle Service

The next time they spoke, Pam had started using the treadmill every couple of days for 15 minutes at a time, and had started eating small, regular meals, thanks to April’s encouragement. However, she told Glenn she wanted to stop taking anti-depressants. Glenn advised her to continue until she spoke to her GP, but also told her about St Germain’s, a service that uses a cognitive behaviour approach to depression and anxiety. Pam said she was willing to give it a go and consented to a referral.

The next time they spoke, there had been a complete turnaround. Pam was eating regular meals and exercising nearly every day. Her GP had lowered her anti-depressant dosage so she could gradually stop taking them. John from St Germain’s had sent information about CBT and exercises for her to follow, and Pam was feeling the benefits already.

In their last conversation, Pam told Glenn that both her husband and son had noticed a difference in her wellbeing. In her own words, she had “stopped feeling sorry for herself”, and said she was even looking forward to doing some gardening!

She told Glenn she would always be grateful for the support she received from all three services.

*Pam’s name has been changed

As you can see, Gateway’s approach is not about duplicating support, it’s about working hand in hand. Social Prescribing is about listening, finding out what someone needs, and linking them to it. The Solihull Lifestyle advisers are the experts in helping people to eat and exercise healthily.

As well as our own services, we are constantly making new contacts with others, widening our network so that we can direct people to the most suitable local support, and “plugging people in” to their community in the most effective way.

If you run a service in Birmingham or Solihull that would like to take referrals from Link Workers, get in touch to make sure we have your details.